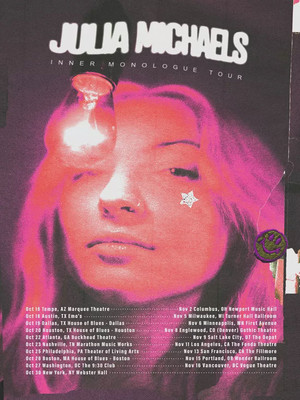 She's long treated pop as a confessional medium, piling stray thoughts and self-observations on top of each other while favoring production that doesn't obscure her narratives.

Julia Michaels Prepares to Grace the Stage on Solo Tour

You've definitely heard Iowa-born singer-songwriter Julia Michaels lyrics before. The young starlet was penning songs for Britney Spears, Justin Bieber, Gwen Stefani, Selena Gomez and Demi Lovato before her debut single 'Issues' landed at number 11 on the US Billboard Hot 100 chart in 2017. After opening for Pink, Maroon 5, Shawn Mendes and others, Julia embarks on her first solo tour.

The artist has received numerous awards and nominations including Grammy Award nominations for Song of the Year and Best New Artist. Her latest EP 'Inner Monologue Part 2' was released last month as a follow up to January's 'Inner Monologue Part 1.' AXS described the EP as presenting "the feelings and inner workings of the mind unraveling. Julia's knack for making the personal pop-friendly is spotlighted well."

Sound good to you? Share this page on social media and let your friends know about Julia Michaels at Marquee Theatre.