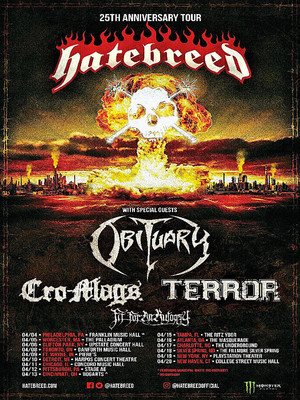 It is the reliability that you know what to expect from this band and you are assured that the messages Hatebreed convey are true and actually invigorating to listen to.

Connecticut metal heads Hatebreed prepare to embark on their highly anticipated tour across America this March. Formed in 1994, the band circulates both the hardcore and metal scenes and were nominated for a Grammy Award in 2004 for Best Metal Performance.

Hatebreed have played at festivals for fans worldwide and, to date, have released eight albums over 19 years. The band's latest album 'The Concrete Confessional' was released three years ago and described as "vital, ferocious heavy music" by The Guardian and a display that "the band's well of passion and anger is anywhere near empty" by Loudwire.

The tour kicks off in San Diego.

Seen Hatebreed? Loved it? Hated it?

Sound good to you? Share this page on social media and let your friends know about Hatebreed at Marquee Theatre.